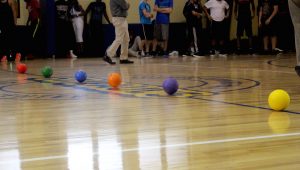 The FLC business program’s third annual dodgeball tournament is sure to get the ball rolling this year  with teachers and students going head to head on December 22nd at Cunningham Recreation Center.

Mr. Gardner, the person behind the tournament, explains that there are many different steps when it comes to planning a tournament of this size. “It’s about getting teams to play [and] spectators involved.” Preparation for the big day can take “anywhere from like four to six hours.” Mr. Gardner had a lot of fun in the first dodgeball tournament but the teacher team was not completely prepared for the level of competition at Cunningham gym. “[The] students were really good. I think we underestimated some of the students’ teams as teachers… they can really play dodgeball.”

Last year’s dodgeball tournament had even more participation. Junior Ian Castro explains that he had a positive experience. He decided to participate in the tournament because he “thought it would be fun. We never really do anything like this at school.” He thinks events like these are important because they provide the “opportunity to socialize with friends and teachers.”

English 3 and U.S history teacher Mr. Fantini played in the dodgeball tournament last year: “I hadn’t played dodgeball probably since high school and it seemed like a fun thing to finish out the year. I thought it was great, I had a lot of fun.” As  for advice for students that are going to play in the tournament, he says “wear good shoes and don’t take it too seriously.”

Even though an event like a dodgeball tournament is fun, it’s not for everyone. Junior Nyasia Eastman states that it’s a “waste of my time” because “I am not in shape to be playing… Nor am I interested in watching students play it.” But, she explains that “I think it’s pretty cool when students go against teachers…it might be for certain students” Eastman ends by saying that it’s important to have events like these because it “Lets students have fun. We need it.”

Dodgeball is meant to be fun, but there are still some moments where someone gets hurt while playing it. English 2 and English Honors 2 teacher, Ms. Garvey talked about the time she played in a dodgeball tournament at her former school, Carroll High School. “It was a lot of fun but I was injured playing it. I was hit with the ball on the head pretty hard and I suffer from migraine and so I don’t really want to play anymore because it’s too much of a risk.”

While, there are some risks that come with playing in the dodgeball tournament, it is a special event because it brings everyone together to enjoy a fun game, something that doesn’t happen most of the time. The dodgeball tournament is going to be on December 22nd from 10:00 am to 1:00 pm.

Grinches of the Public School System