When we selected Franklin Learning Center to be our school for four years, we knew it was a National Blue Ribbon School of Excellence. We knew we could choose a major and work with students in a magnet school environment. But FLC didn’t advertise its building conditions: classrooms covered with posters to conceal the peeling paint on the walls, a leaking roof that damages the ceiling below, malfunctioning alarm systems, and toxic building materials. If FLC is exceptional, it is as much for its hazardous building as its strong academics and programs.

But FLC is not alone. Nearly three-quarters of Philadelphia’s public schools are assessed to be in poor conditions as a result of delayed maintenance. The aging buildings have more than 12,000 issues and reparations would cost the district around $5 billion–nearly the same amount of money that caused the longest federal government shutdown in US history. Obviously the School District of Philadelphia has a limited budget to work with and, no matter the reason for the decades of delayed maintenance, the school board must now contemplate the cost of its more than 200,000 students’ safety.

A learning environment should strive to be free of harm and while some risks are unavoidable, a toxic building is not. Parents should not have to send off their daughters and sons to school five days a week, trusting their safety in the same building whose environmental conditions now raise concern. 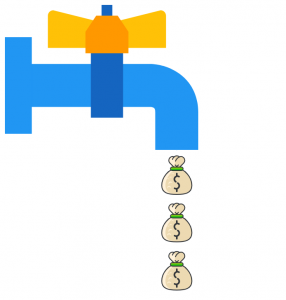 Lead is one of the biggest environmental hazards a student will encounter in the School District of Philadelphia. Common in old plumbing and paint, lead can cause damage to the brain, other vital organs, and nerves if absorbed. And that’s just the physical trouble. Lead absorption can also cause behavioral problems like learning disabilities, seizures, and, in some cases, death.

The symptoms of lead poisoning are headaches, stomach aches, nausea, tiredness, and irritability. However, in some instances  some people never show any symptoms.

While some experts deny that small exposure of lead can cause complications, the Environmental Protection Agency argues that it isn’t safe for children to be exposed to any level of lead. Any amount of lead can affect the systems in the body.

Lead is common and exists in many schools, but it’s especially prone to leach into the water supply of schools like FLC that were built before 1986. This is due to the fact that pipes, fixtures, and soldering were once made using lead until the government outlawed it in 1978.

In Philadelphia, schools have been required to test for lead in drinking water since 2016. According to a report by the Philadelphia Inquirer, as of May 2017, FLC has one report of lead in the drinking water: it was recorded at the water fountain outside of room 101-102 at a level of 15.2 parts per billion (ppb). The fountain has been disconnected and marked out of order all year.

Compared to the EPA’s national action level of 15 ppb, the School District’s action level is a more strict 10 ppb. There is no public data about the level of lead found in other fountains and sinks around FLC. Presumably, it is below 10 ppb, but no one should be ingesting the metal at any level.

Asbestos is a natural mineral that is used in a range of things like insulation, hair dyes, and cars. For a long time, asbestos had been considered a “miracle” mineral due to its heat resistance and durability. Because it could help prevent heat damage and fires, use of asbestos was widespread and common. Yet, this so-called miracle mineral has been everything but miraculous.

Exposure to asbestos fibers can cause serious lifelong damage like lung cancer, asbestosis, and mesothelioma.

Asbestosis is a chronic lung condition, that causes scarring of lung tissues and inflammation. This leads to difficulty breathing and sometimes death.

Asbestos was most commonly used in schools built before 1980 in soundproofing, insulation, ceiling, and floor tiles. In 2017, FLC had a total of 29 reports of damaged asbestos throughout the building.

These are the most recent asbestos reports from the district. It is possible that some or all of the 29 reports have been remedied since 2017. 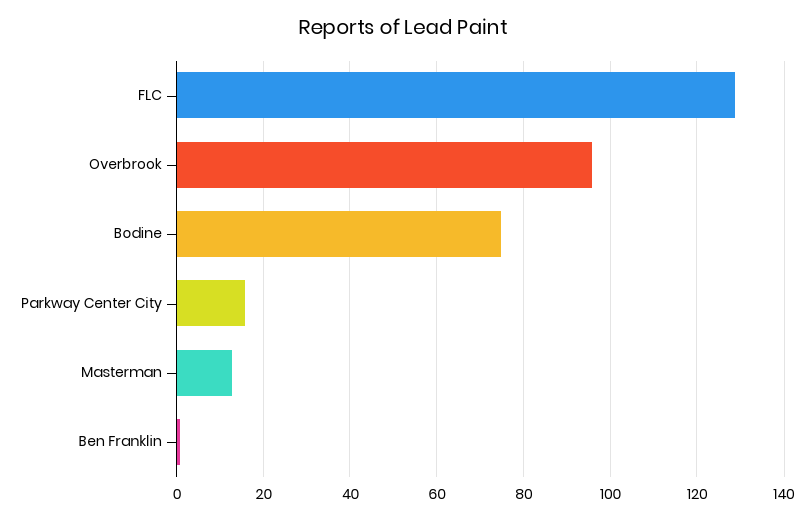 Originally the William Penn High School for Girls, FLC’s building broke ground in 1908 and was completed in 1909. A building that old will have layers and layers of paint and, like most schools in the district, some of those layers are lead-based paint.

Lead paint is highly toxic and may cause a range of health problems, especially to young children, adolescents, and pregnant women. While not automatically hazardous, lead paint can chip or crumble into dust as it ages. While stories of children eating chips of lead paint often make headlines, the more common danger is breathing lead dust.

According to the District Building Surveys and Environmental Maintenance Reports in 2017, Franklin Learning Center has 129 areas of flaking or otherwise damaged lead paint.

While some of these areas have been addressed in the past two years by district paint crews, FLC is still full of classrooms with flaking paint and damaged plaster.

Compared to schools in our area, FLC stands alone: Parkway Center City has 16 reports, Masterman has 13, and Ben Franklin has just 1.

As previously reported by The Flash, FLC suffers from a faulty fire alarm system. Just this year there have been multiple alarms that caught even the administrators by surprise. Most notably,  one alarm in the fall of 2018 evacuated the building into a cold rain and eventually required the entire school to be sheltered in Ben Franklin High School’s auditorium while the Philadelphia Fire Department inspected FLC.

Alarms have come in the middle of lunch, in the early morning before classes begin, even after dismissal. And while it is true that a fire could strike at any time, excessive alarms and evacuations can make it very difficult for anyone to feel safe and secure in a building.

The most dangerous result of an overactive alarm system is that students begin to take alarms less seriously. Hopefully FLC never needs its alarms for a real emergency but in the event of a real fire, the staff and students of FLC must be able to trust their alarms.

What is being done

Early last year, the dissolution of the School Reform Commission presented a golden opportunity to elect a new school board who will recognize the crisis of Philadelphia’s toxic school buildings and dedicate serious effort to improving education in Philadelphia. Parents, educators, and students alike gathered to show support and voiced changes they want to see in Philadelphia schools. For FLC, it will cost an estimated $25 million to repair all the problems with the building alone. To install new systems and features would cost $77 million.

That price tag is formidable, especially when considering that FLC is hardly alone on the list of ailing district buildings. The city’s spending on education totals more than the surrounding districts, but it has yet to drive dangers away from the students.

In June 2018, the state of Pennsylvania and the School District of Philadelphia combined funds into a $15.6 million grant to improve school conditions. Of that money, it’s recorded that $8 million of district money is designated to remove lead paint, mold and asbestos, while the commonwealth provided $7.6 million for lead paint remediation at 57 schools in the district.

Over the summer, more than 1,200 District maintenance staff and conductors completed an extensive schedule of work in an effort to ensure the safety and maintain environmental conditions of school buildings in Philadelphia. Reparations went into paint and plaster, asbestos, air quality, and the modernization of classrooms. This work followed up after the School District announced updated cleaning standards (“The Cleaning Guidelines”) to make sure all schools upheld the same standards.

But is it enough? So far that money has not improved the conditions at FLC. When asked, Principal Nicole Lee didn’t know when crews might come to remediate the problem of lead paint: “They don’t give you a timeline.”

Lee says she “constantly advocate[s] for things to be repaired” but thinks the school is a safe place to come to work each day. Even though she believes the school is safe, she does admit “frustration” sometimes: “Working in a bureaucracy, you know that everything is about a process. Waiting for the process to unfold is difficult.”

FLC Medical Assisting teacher Jessica Way is done waiting: “We have to push City Council and we have to push our state legislators to put the type of money into repairing our schools that we need to fix them.”

“My big concern” she continues “is that when children see buildings that are not being maintained, and when they come to schools where you can see people are not invested in providing children with the services and the environment that they need, to be as successful as they possibly could be. I worry that children will also see our schools in contrast to what they see on television and what they see happening in schools in the suburbs–that gives them a sense that they are not important. They are very very important.”

Keeping all of this in mind, there are steps that should be taken to improve our schools. First, the district must be transparent and keep a current list of the problems that need to be addressed. Second, Philadelphia City Council and the new school board must take the neglect of the past into consideration when agreeing on future financial plans for the school district. Decades of deterioration have caused expensive problems for the district and its buildings. The only way forward is with the funds to fix those problems.

Third, the district should stop spending money on new fields and other facilities-related expenses until all of its students are in completely safe buildings.

Lastly, students should be informed that these problems are occurring and are putting them in danger. Since this issue affects them, students can take part in advocating for repairs to be done. This can include protests, writing letters to local congressmen, informing radio stations and news outlets. If a large enough number of students show concern, people in power will listen. Only then can change start to happen.

Socrates said “there is only one good, knowledge, and one evil, ignorance.”  The only way to do good by FLC is to make sure that everyone knows what is going on in FLC. For the sake of our future, students, teachers, staff, and parents need to stay informed with current school building conditions.

We can spread pictures of the current state of the FLC’s building by using what we all do best, social media. Something as simple as posting pictures on Instagram or Twitter of areas around the school that are in bad condition with the hashtag #fixphillyschools can help to spread the word.

We must make our voices heard in order to make change. Nothing can be improved if no action is taken.