Take the 2017 Las Vegas shooting for example, where a middle aged man shot and killed 58 people and left more than 500 injured. The 2016 Orlando shooter walked into a public place and killed 49 people.  As rough as this may sound, those are just mere summaries of the events that actually took place. 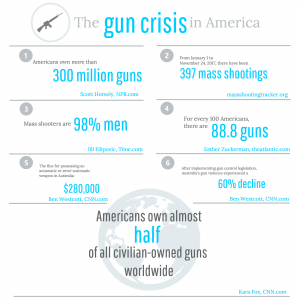 Up to this point massacres and mass shootings have rarely led to any political change despite too many common occurrences. There have been proposals but no change.

Americans own more than 300 million guns, twice as many guns per person than there were in 1968. As gun ownership increased post-1968, so did gun-related deaths. In 2015, New York Times columnist Nicholas Kristof reported that “More Americans have died from guns in the United States since 1968 than on battlefields of all the wars in American history.” This direct correlation between guns and gun violence cannot be ignored.

There have been 397 mass shootings in America from January 1 to November 24, 2017. That’s more than a mass shooting every day. If this frequency is surprising, it’s because not all of these events make it to the national news.

The shootings reported on television news outlets and on the radio in the mornings are the “larger” mass shootings. Not larger in terms of how many more people are killed, but larger with regard to how big of an impact this mass shooting could have on people if it was publicized.

The victims of these mass shootings are not generally concentrated in a certain demographic either. Men, women, and children of all ages, races, and religions have been targeted. The perpetrators, on the other hand, are almost always men. Time magazine estimates that men make up 98% of all mass shooters.

The causes of American mass shootings vary. The more mainstream reasons being the very much outdated gun mandates, the loose process of background checks, and America’s divided opinions on gun control.

In response, some people ask “What is the Government doing in the midst of all of this?” The gun mandates have been on hold for years now, and no one seems to really care about fixing it either.

The process in which someone can access a rifle is very unchallenging. With new networks of sale and transportation on the internet, an average person can purchase guns without the need to give any of their information at all, not even their mental illness backgrounds.

Ebay is a very popular sales network that is used by more than millions of people. On eBay, a person can purchase a full gun, and also gun parts, with only needing to provide their names for the purchase. This process is even easier in black market sale networks. In the black market, a person can purchase multiple gun parts, guns, and ammunition, without needing to give even a single piece of information about themselves. That means a person who has a history of mental illness, disruptive activities in society, and distasteful intents with weapons, can purchase a gun and use it to their solitary without the need to worry having to provide a background check beforehand.

The ease of the process of buying a gun, due to the not so strict gun laws, renders people of all situations and backgrounds able to carry a gun, even if they do not meet the requirements of the carry. Questions are formed about who can actually be able to carry, but with the elementary style background checks, it seems as though anybody can carry. However, in the current societal temperature and the growing hate for guns, there needs to be a more challenging and complex background checks and ultimately new gun laws. People need to be questioned and tested for their intents and their background, or else gun violence and mass genocides with assault rifles will never come to an end. 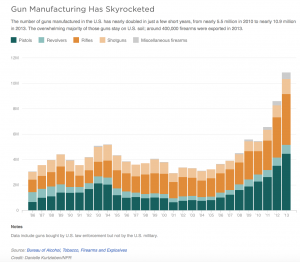 The United States has very loose gun laws varying from state to state, based on who should be owning guns and, if they even need a license to carry them. With all these irregularities between  states and the federal  government it’s easy to get your hands on a gun whether it be legal or illegal. Legally, for every 88.8 guns there are 100 people, or about 270,000,000 guns, which is the highest total and per capita number in the world. 22% of Americans legally own one or more guns (35% of men and 12% of women).  This is not including illegal transactions that many undergo to get their hands on the weapons.

Now let’s cross  the Ocean to Australia before it had 25+ guns for every 100 people. Even with this  ratio Australia  did

enforce their gun laws until Port Arthur. Port Arthur was a mass shooting that killed 35 people in 1996. It was done by one man with an automatic gun. After this the Australian government  banned  all  automatic and semi-automatic weapons and included a national buyback scheme that was issued. If this law was violated in any way the violator would be charged with a $280,000 fine and up to 14 years in prison. The Australian  government  was driving fear into their citizens in order to get their guns and it worked. Australia concluded a three-month national gun amnesty  were people turned over morethan 26,000 unregistered, illegal or unwanted firearms to local authorities without facing a penalty or prosecution. Over the years the number of Australian mass shootings or people dying from gun violence dropped drastically with a 60% decline.  Gun laws should not be made where there are no guns but instead there are some laws restricting what types of guns should be allowed and to who.

The answer to this country’s gun problem is not as easy as simply taking all of America’s firearms away. Instead, the process of accessing and possessing a rifle must be strengthened. The background checks done on people before getting their guns should be challenging, and will ultimately not give guns to those who are unfit to use them. There is evidence that strengthening gun laws can reduce the rates of mass shootings. Now it is time for Americans as a whole to decide what is more valuable, their right to carry or their right to live without fear of gun violence.

Did Eagles Fans Take Their Celebration Too Far?