The Plot In You, an American metalcore band from Ohio, formed in 2010 just released their new album “DISPOSE.” “DISPOSE”, which is also their fifth album after signing with

Fearless Records, is a rock album that 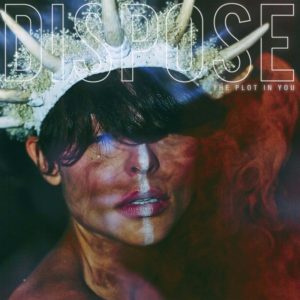 I think is great. This album shows how much this

band has grown and started moving away from the songs where the singer, Landon

appropriate. After three years I knew the band was coming out with a new album when I heard their

new song “FEEL NOTHING”. I thought this song was a good way of introducing the new album, what is to come from the album, and how much it will change the bands image.

There would be three songs that come out after this and one of them is called “DISPOSABLE FIX.” A song that came with a very good verse, a good build up with great guitar/base play and very good drums that went with the rhythm of the song. This shows that the band can go in a different direction with their music because  of songs like these where it is softer and has a smoother rhythm. Another song that came out before the album was the song “NOT JUST BREATHING” where it has the same feel as “FEEL NOTHING” but it has that combination of good rhythms and emotional singing.

of that is the song “I ALWAYS WANTED TO LEAVE” where you can just hear the pain and emotion in the lyrics. While listening to this album I was really surprised because I thought this was

going to be like the last four albums, but when I heard “FEEL NOTHING” I knew this was going to be something different and that’s what I liked about this album. I like that the style they went for was songs that stray away from a lot of screaming but that can still pay homage towards their last albums. This album is showing signs of growth from the band where they can switch things up and the music still sounds great. To me, my favorite songs from the album would be “DISPOSABLE FIX”, “I ALWAYS WANTED TO LEAVE”, and “RIGGED”. I would recommend this album and I give it a 4.5 out of 5 stars.

The Circle Review: A Pointless Adaptation