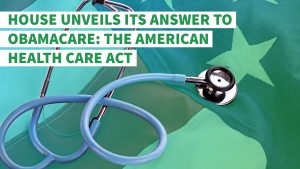 Universal Health Care has been an often debated issue between politicians and citizens dating back to the early 20th century.  In March 2010, it seemed like major steps were taken forward after President Barack Obama signed the Affordable Care Act into law, supposedly helping more people get insurance. The law offered several benefits such as, insurance companies not being able to deny coverage for pre-existing conditions and children having the right to stay on their parent’s health insurance plan until age 26. Even with those positivities, the act still gained controversy with opponents.

Since Donald Trump’s inauguration, millions of Americans have feared that they or their families will lose their health care if Trump and his administration successfully repeal and replace Obamacare. At the same time, another portion of the country wants to see Obamacare repealed and replaced with a better system due to philosophical or financial reasons. A lot of Americans are against the law because they don’t believe that they should be forced by the government to buy insurance or be punished if they don’t. Others see it as a scam to make hard working taxpayers help the poor and lower class citizens. Like a lot of issues in this nation, healthcare is one that has dividing opinions, so a health care reform could mean a lot of to this country, good or bad.

For younger individuals, they will continue to get coverage from their parent’s insurance until age 26. This is one of the few provisions that will remain under Trump’s plan.

For insurance companies, they still cannot deny coverage based on pre-existing conditions, but can charge 30% higher premiums to those entering an individual health market, regardless of health status. Insurers are still required to cover certain benefits and over 10 health services, such as maternity coverage, prescription drugs, and mental health care.

For the expansion of Medicare, it will be phased out for those who don’t enroll before 2020. The amount of federal funding states receive per enrollee would be capped. Types of enrollees may vary from the physically disabled to children.

Individuals would be getting age-based premium tax credits, with older Americans getting more. A Patient and State Stability that that can be used to decrease the cost of the citizens of that state and a 9 year funding of over $ 100 billion. Also in 2020, small-business tax credits would end. Most of the taxes from Obamacare would be destroyed as well as annual fees on entities.

The bill will stop funding states for a year to place the operates on abortions and clinics such as Planned Parenthood cannot operate on abortions unless cases involve incest, rape, or danger to the mother’s life.

Those are just some of things that the public should expect if this new bill becomes law in the future. How good or bad it could be is what this nation is anxious to find out.