Everyone knows about the dinosaurs and the ice age but there were four more events in Earth’s past that have wiped out all living things. Last year NASA announced that we are overdue for a world wide extinction and we are not prepared for it. There is a volcano that could erupt at any second and it could destroy the world as we know it. The earth is just like a giant ball of hot lava and it creates an immense amount of pressure that will eventually need to be released. This creates a volcano but what about a Supervolcano?

Volcano vs Supervolcano, What’s the Difference?

A volcano is a mountain that opens downward to a pool of molten rock below the surface of the earth. When pressure builds up, eruptions occur. In an eruption, gases and molten rock shoot up through the opening and spill over or fill the air with lava fragments. Eruptions can cause lava flows, hot ash flows, mudslides, avalanches, falling ash, and floods.

A supervolcano erupts less frequently, sometimes even hundreds of thousands of years apart. Its eruptions, however, can eject around 240 cubic miles of volcanic material in the form of molten rock, hot gases, and ash.

Yellowstone, the Eruption That Will Wipe Out Everything

Yellowstone National Park is sitting atop a super volcano that has the capability to wipe out mankind. Scientists have been speaking about this issue but not many know about it. They even say that “nothing can be done to prevent an eruption.” “The temperatures, pressures, physical characteristics of partially molten rock, and immensity of the magma chamber are beyond human ability to impact–much less control.”

The Yellowstone Caldera is a volcanic caldera and supervolcano that erupts every 600,000 years and the last time it erupted was 640,000 years ago, meaning we are 40,000 years overdue. Many think that the eruption could trigger a global extinction. While that is a possibility, it may not be very likely. It’s more likely that the giant smoke ash cloud that forms afterwards will spread extremely wide, blocking the sun causing global climate to drop and possibly trigger another ice age.

Any second this supervolcano could erupt. We never know, though, so it could happen months or years from now. As of now scientists are continuing to complete more research about the Yellowstone National Park supervolcano. 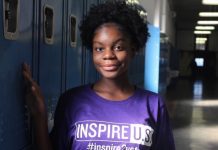 A Walkout To Save Our Lives