This year, Game Club is attracting a lot of new positive attention.

Game club is really simple. ¨It’s a place where kids come and play games,¨ said Mr. Arleth, the Game Club adviser. Every Friday after school in room 209, students come together and play games. Whether you play board games or you’re interested in playing ¨Super Smash Bros Wii U,¨ you don’t even have to sign up, you can simply just show up and game.

But the question is, why do students voluntary stay after school to play games? Mr. Arleth said ¨students just want to play games.¨ But that can’t possibly be all. For starters, Game Club welcomes some friendly in-school competition. One of the most popular games is Super Smash Bros, an eight player fig 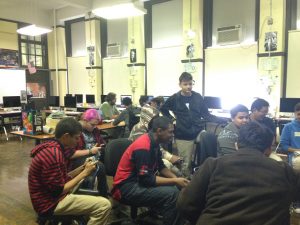 hting game. This allows a handful of students to have fun without any commitment or having to spend any money on team uniforms.

The club is also a great stress reliever. Many of the hard working students just want a simple break. Sophomore Chris Costello says “It would be hard to deal with a lot of the stress we get from school without this club.”

For those looking for a gaming change of pace, Mr. Arleth also offers a variety of board games each week. From Pandemic to Puerto Rico and Magic to Munchkin, students face off each week in completely new ways.

So whether you would like to blow off some steam, or just play a quick game,

stop by room 209 after school on Fridays and get your game on!