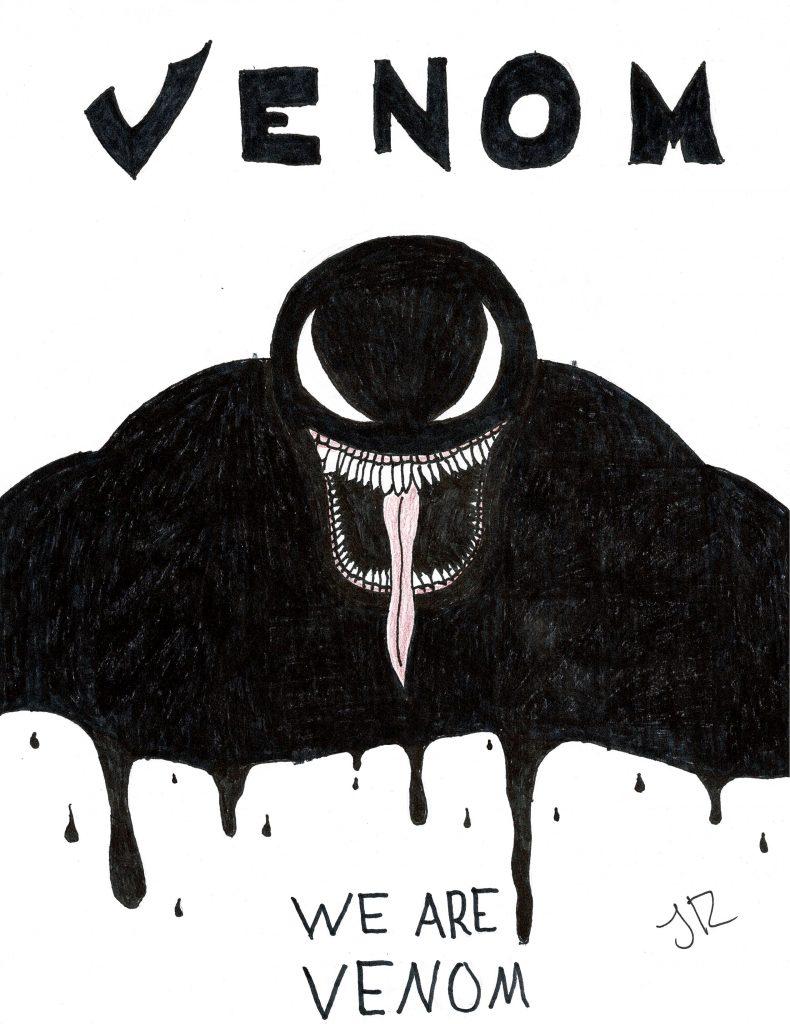 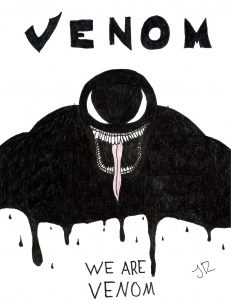 There’s a line from Eminem’s song for the movie “Venom,” that goes “When you get hit with my venom,” which, in my opinion, explains the movie perfectly. Watching this movie felt like a clean right-hook straight to my jaw. In other words, this movie was bad.

My expectations were not met. It’s a movie about one of the most recognizable anti-hero/super villain, star Tom Hardy– who is one of the best actors to this very day, and it is directed by Ruben Fleischer, who made Zombieland. But sadly, Venom didn’t have the turnout that was expected. When I watched the movie Venom, all it reminds me of was DC’s Suicide Squad. You take a group of talented people, then you put them to work to make a movie, yet have producers that create roadblocks that ruin the potential the movie had, creating a heap of garbage.

On a level beyond the basic review for this movie, it doesn’t have a sense of pleasure. The cinematography is bad, there isn’t a single special shot that stands out. The acting is bad, Tom Hardy seems like he doesn’t know what movie he’s in, and everyone seems to only give about half the effort they can. The music is plain and doesn’t have a impact.

The only good song that had any relevance is Eminem’s song “Venom,” which only has it’s importance due to the person who created it. The villain is also laughable, that creates no sense of fear or terror, just sorrow and an empty wallet. The actor who plays Venom, Riz Ahmed, is just as disappointing as the script due to the bland, and broad acting job. The CGI is just terrible, as if they still use box computers. I don’t know how the original Sam Raimi Spider-Man movies have effects that hold up better than this.

The most disappointing thing about this movie was the action. In most dumb superhero blockbuster movies, you’d expect there to be good action. Not in this movie. The problem with the action in this movie is that Venom is practically invincible, so there’s no tension whenever there’s a fight. The final battle has Venom fight Riot, who is basically just a bigger Venom but a different color. Having two fake-looking characters who can’t die isn’t that entertaining.

Also the movie wants to be PG-13 so they can’t go all out with the action. The rating does nothing but hold back the movie. There’s even scenes where people get their faces bitten off and there’s no blood. Small things like blood would give the extra tension that this movie needed to be better.

By far, the worst thing about this movie is the tone. This movie is trying to be two different movies at the same time. Part of it wants to be a scary, brutal monster type of movie, while the other is trying to be this fun, lighthearted action movie with some dark humor. Both these separate tones collide with each other to create what can only be described as a mess.

To this movie’s credit there is one good thing about this movie, which is the interactions between the main characters, Eddie Brock and Venom.[/vc_column_text][/vc_column][/vc_row]